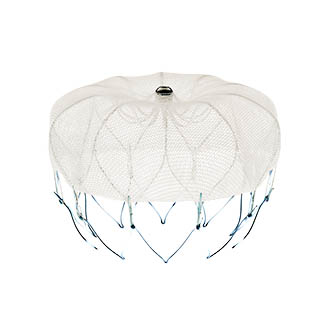 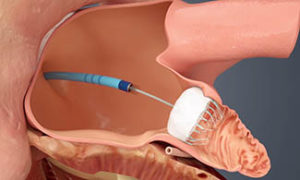 The WATCHMAN procedure is a device, like a stent, placed into the Left Atrial Appendage (LAA).  The LAA is a finger like pouch, sitting off of the Left upper chamber(atria) that has long been known to be the source of more than 90% of blood clots that lead to stroke in patients with AFib.  In the past, at the time of open heart surgery, surgeons would at times remove this pouch, or clip it closed, in patients in whom long term blood thinners posed difficulty.   For more than 15 years there has been research into how to accomplish this same goal, in a minimally invasive fashion.  In Europe since 2010 and in the US since 2015, the WATCHMAN procedure has been commercially available to offer stroke prevention in patients with AFib.

Like the cardiac ablation procedure described on our Afib page, the device is implanted via an IV in the crease of the groin and is passed up and into the heart under xray guidance.  In the Left atrial appendage (LAA), it is deployed and “plugs” that pouch so that blood clot cannot form there.  Over time, as with cardiac stents, it is covered by heart tissue and becomes part of the body.  In large studies, when compared to blood thinners like Warfarin, it was found to be equally effective in stroke reduction, highly successful(~97%) and associated with low risks, similar to those found for ablation or cardiac stents.  For our patients who have had issues with blood thinners, or who have particular issues that would make being on blood thinners more difficult, it offers an excellent alternative.